What does the Sanders Institute need to do? Really

To Dr. Robert Reich,
THE SANDERS INSTITUTE
131 CHURCH STREET
BURLINGTON, VT 05401
Dear Dr. Reich,
Thank you for your letter to me.
I would like to respond you, and hope my response will reach you as well.
The Sanders Institute does a good job providing some general education and emotional support to people interested in progressive politics.
But unfortunately it does not offer anything to people who already have deep understanding of the current politics, its roots, and who have a clear view about the most important steps required to correct the current social, economic, and political course of the Country.
In its current state the Sanders Institute is no different from many other political groups and movements in the field of progressive or liberal activism.
The strong impression is that activists and politicians in all those groups, including the Sanders Institute, have no idea about the political history of the last half of the century – and I mean the world history. It is like nothing has ever existed except America, and only in America people experience for the first time in the whole world political battles and revolutions.
But nothing happening in America today is actually new, had had its versions in Russia, Germany, England, France (at the least).
The lessons from that political history are being ignored.
In result, activists and politicians in all those groups, including the Sanders Institute, concentrate on logical and emotional appeal to the population.
By the way, conservatives do it much much better than progressive groups, including the Sanders Institute.
But much more significant is that the most important question of politics – the question about power – cannot be resolved purely on logical and emotional appeal to the population –
it requires a specifically designed hierarchical organization.
No one, including the Sanders Institute, is building such an organization.
That is why all the efforts of all progressive groups, including the Sanders Institute, are bound to fail.
The best-case scenario is that in 2018 the Democrats restore their majority in the Congress. But that DOES NOT mean the victory for the progressive agenda, including the agenda of the Sanders Institute.
The approval rate of the Congress is dismal. But is has been that way for at least a decade – no matter which party had the majority!
Thinking that restoring the Democratic majority in the Congress is the equivalent of the victory for the progressive agenda is an illusion or a delusion (those are the best- and the worst-case scenarios).
An actual political revolution begins from a thorough study of the history, and the development of a new working model of political structure of a society (sine a revolution is a transition from an old state to the new one, it requires the vision of the new state).
That demands willingness to spend time on rethinking and critical analysis of all previous views and models.
I have been saying again and again that it will be absolutely useless to apply ordinary method trying to solve an extraordinary problem.
The mere fact that almost no one could predict the victory for Donald Trump is already a sufficient proof that no existing socio-political or economic model can be used to design the right political steps.
Some elements of the new model have been presented in the series of my posts at:
http://3dforce.net/
and
http://the3dforce.blogspot.com/
including such post as:
When emotions are not enough
Basic Income: From an Ideology to The Working (!) Mechanism

“A spectre is haunting America – the spectre of … .”

Are the political parties usable? That is a ... question

For progressives Convergence seems yet elusive - but still possible!

Peering through the fog of brainwashing: the real reasons behind the conservative politics.

Dear Senator Sanders, Thank you for your letter

What should really differ a “Progressive” from a “Conservative”?
DraftBernie and “People’s Party” is NOT the answer
Why I have NO Trust in Democrats

Democratic Party Leaders Have No Vision

As you can see, the volume of my writing is within the volume of a small book; feel free to use it for the advantage of the cause of the Sanders Institute.
Thank you for staying engaged,
Valentin


P.S. It seems that people at the Sanders Institute do not know human psychology well enough. You should do more than just asking “What do you think?” You need to ask to provide comments and advertise that the best 25 comments will be posted on a web page designated to presenting the best comments; and once in a while even stir a competition and the winner will be talking live with some of the members of the Institute. You need to use a variety of approaches to engage the public into the conversation, and then build on it your local branches.
A letter from the Sanders Institute
Valentin,
The U.S. Congress has not passed a Federal Budget this year, which is one of their primary responsibilities and a fundamental function of government. They have been “kicking the can down the road” since October 1st of last year by passing four continuing resolutions.
The underlying choice isn't just protecting the Dreamers or providing $25 billion to construct a border wall. It's also coming up with a federal budget, and deciding what our priorities should be as a nation. Some members of Congress would like to see us increase military spending by $180 billion without any corresponding increase in domestic spending. We have some other ideas. 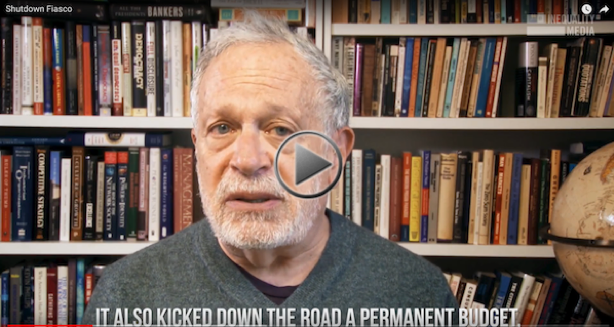 WATCH THE VIDEO HERE
The Sanders Institute and I have worked together to make this short video explaining where we are now, how we got here, and the options that could be on the table if our government was working as it should.
Thank you for staying engaged,
Robert Reich

Posted by Dr. Valentin Voroshilov at 11:58 AM