When emotions are NOT Enough.

also, on reddit.com  at
https://www.reddit.com/user/valvor333/comments/7ixppe/wahts_wrong_we_are_here_and_want_to_be_there_but/

Lately, I tried to summarize some of the conversations I read on Facebook, or even had some participation in.
This is what I got so far.


- We will vote out old folks and will vote in the NEW ones!


- Do they know how to get us from HERE to THERE?


- Have you asked if they know how to get us from HERE to THERE?


- Why? What if they don’t know how to get us from HERE to THERE?


- They say they will get us from HERE to THERE!


- They are NEW! And they told us they could!


- We are HERE! We want to be THERE! The new guys will get us from HERE to THERE! 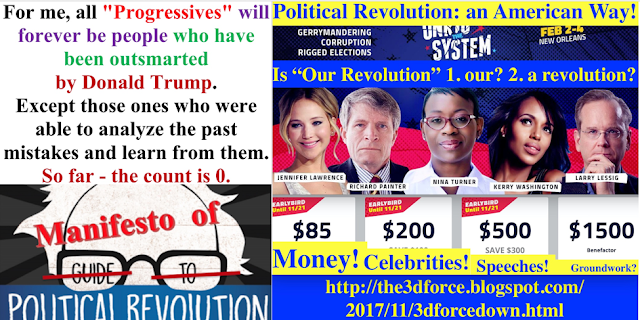 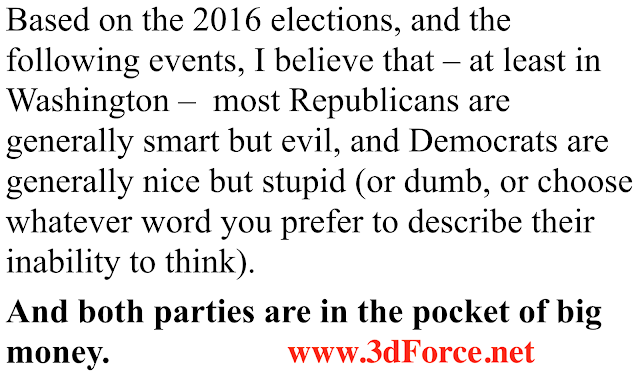 ____
Emotions are on fire on both sides.

The other day I watched “The Opposition” with Jordan Klepper, and heard about a right alt group called “Turning Point U.S.”, and I checked their Facebook page and found this picture. 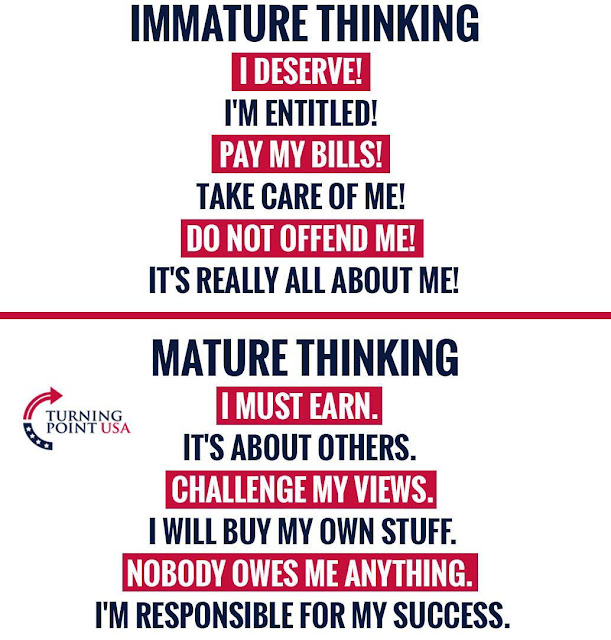 How about "do as I do, not as I say"?
Spreading out slogans is easy, but it does work on people who have no good education, and no ability to reason.


Soon I got this (below) response to my comment. I find it very informative.


NEVER in my LIFE, HAVE I SEEN A PRESIDENT ACTUALLY CARRY THROUGH with CAMPAIGN PROMISES!! He just didn't say things WE WANTED to hear, to get HIMSELF elected...NO.....NOT A CHANCE...NOT this president!!!!.....He's actually doing what he promised....ONE by ONE, PIECE by PIECE and DAY by day and HOUR by HOUR!!!

This man AND the cabinet he selected to make our country the BEST it can be, are setting records on Promises kept!!!

AND, THE MOST REMARKABLE THING, is that he doing this IN SPITE of the ENTIRE democratic party, the republicans that were NEVER TRUMPERS, the EVIL EMPIRE of the Clinton machine, CNN, Shepard Smith, Juan Williams, Paul Ryan and Mitch McConnell!!!!

Talk about the ART of the DEAL!!!! President Trump has PROVEN that he is the REAL DEAL!!! He is the MAN we voted for and NOT just a flim flam politician like the rest of them!

I really have to thank him for exposing the Washington D.C. (district of corruption) swamp and bringing it to the light of day!!!

We, the people, are finding out just how corrupt our politicians are, how low they will go, how they would rather take the country down that to help our president fulfill his promise of Making America Great Again!!!

We are finding out how many millions of OUR tax dollars are paying for these maggots' lavish lifestyle of wine, women and song AND not only that, BUT, then they have the AUDACITY to PAY OFF ANY ACCUSERS of their slimy lifestyle with OUR MONEY!!!

I don't ever remember a time when congress made any difference, they just seemed to groan on and on and accomplished NOTHING for years on end!!! This president EXPECTS them to ACTUALLY accomplish SOMETHING!!!

NEVER have I seen an entire party, the democrats, not only disagree with a president, BUT OPPOSE EVERY SINGLE THING HE DOES.....What are these overpaid fools doing FOR our country???!! They haven't offered one positive thing to add to the healthcare bill, the tax bill, or anything at all!!! No matter what the president tries to do, THEY WILL OBSTRUCT at any cost, EVEN IF IT TAKES OUR COUNTRY DOWN....They will stop at nothing including LYING about what he's trying to do, just as long AS IT SERVES THEIR PURPOSE to PROMOTE hatred of OUR president!!!!

NEVER have I seen a party, (the democrats) that has tried to change America as we know it...and NOT FOR THE BETTER!!

NEVER have I seen more people, even myself, take such an interest in politics.....The Trump phenomenon took over the USA by actually getting us involved and exposing what really is happening in D.C. He generated an energy we had never experienced before.....He says it like it is, even though we may not always agree with HOW he relays his messages, but ONE THING FOR SURE,,,he's REAL!!!

I, for one, just CAN'T imagine ANYONE, not realizing that America we knew, the stock market, the economy, jobs and GDP are all roaring back, because we FINALLY have a businessman in charge.....not a political HACK!!! He knows that TIME IS MONEY, which is something the rest of the politicians have NO conception of!!! THEY JUST THOUGHT THEIR LITTLE PARTY WAS GOING TO CONTINUE FOREVER!!!

I, along with millions of patriots, owe him a huge pat on the back, for facing the haters of the world and that includes Hildabeast and Obama, AND STILL CARRY ON with MAKING AMERICA GREAT AGAIN!!!!