Why Should the Democrats Support The 3-D Force?

Why Should the Democrats Support The 3-D Force? 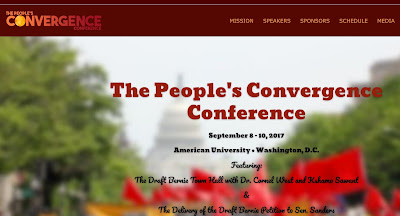 First of all, The 3-D Force is NOT a 3-d party.
In this post; http://the3dforce.blogspot.com/2017/08/mawa.html you can find a clear description of the difference between the two.
And in this post; http://the3dforce.blogspot.com/2017/04/3dparty.html you can read more on the true role of a third party in the current political climate.
DraftBernie people and other similar groups who call themselves “progressive” are at war with the Democrats.
They blame the Democrats in – well – everything bad what happened in the politics.
I do understand the reasons behind that sentiment. I also blame the top Democrats in many things, including being arrogant, shortsighted, bought by the big money, and eventually they brought to us President Trump.
However, the political calculus shows me that the Democrats are not enemies; strategically, they are allies.
And the Democrats need to understand that a new “progressive” force is the best thing which could have happened to the Democrats.
Firstly, the Democrats will have to sharpen their ideas, reshuffle the top people, and that will make the party stronger.
Secondly, every political action which brings more people into politics is good for the democracy.
But more importantly, the 3-D Force (the right one, the smart one) will be fighting the same enemy the Democrats are fighting, i.e. the Republicans.
Let’s imagine, that one Republican, one Democrat, and one 3-D Forcer are fighting for the same chair (could be a local election or a national, does not matter).
There are only five possible outcomes.
1. The Republican candidate is much stronger than all other candidates, and wins. Well, there is nothing what can be done at this point in time.
2. The Democratic candidate is much stronger than all other candidates, and wins. Well, there is nothing what can be done at this point in time.
3. The Republican and the Democratic candidates go head to head; there is no obvious leader. In that case, the 3-D Forcer will make all the difference. Two weeks before the election day the 3-D forcer can appeal to his or her supporters to through their votes to the Democrat. Why? Because most probably, the Democratic candidate will present ideas which are much closer to the ideas of the 3-D Forcer, and electing him or her would be just the right thing to do.
And that is what the 3-D Force is about – doing the right thing at the right time;
making a clear pragmatic decision (not bound by an ideological dogma).
4. Another situation may happen when all three candidates go head to head. In that case, the Democrat and the 3-D Force should negotiate and forge the agreement and go to scenario # 3.
5. Finally, the last possible outcome is that the 3-D Force candidate is obviously stronger than the other two. It means, the Democrats could not find a good candidate, hence need to rethink their approach (which is already a good thing). Also, the Democrats should agree that having the 3-D Forcer is better than the alternative.
As one can see, out of five possible situations, there is only one which is really bad for the Democrats.
And that is why the Democrats need to embrace and support the formation of the 3-D Force (www.3dForce.net).
Unfortunately, people who are trying to create the new movement (a.k.a. Convergence), so far have no correct vision of the role that movement has to play, and the strategy that movement has to follow.