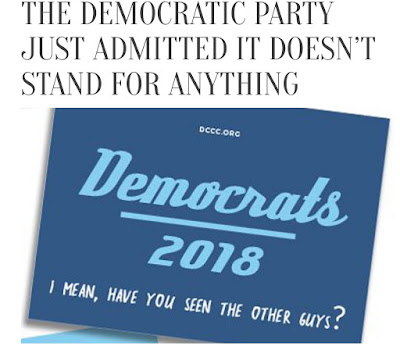 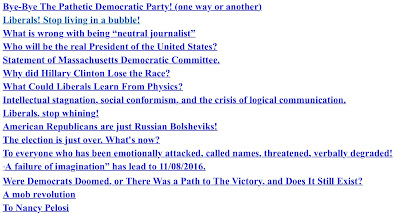 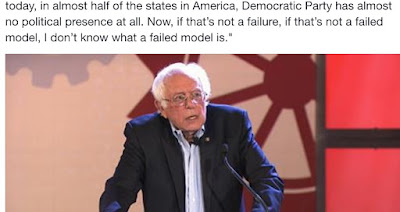 Appendix (added a day later).
Bernie Sander’s quote from the transcript of his speech:
https://www.democracynow.org/2017/7/3/bernie_sanders_on_resisting_trump_why
"Now, I am often asked—I’m often asked by the media and others: How did it come about that Donald Trump, the most unpopular presidential candidate in the modern history of our country, won the election? And my answer is—and my answer is that Trump didn’t win the election; the Democratic Party lost the election. Let us—let us be very, very clear: The current model—the current model and the current strategy of the Democratic Party is an absolute failure. This is not—this is not my opinion. This is the facts. You know, we focus a lot on the presidential election, but we also have to understand that Democrats have lost the U.S. House, the U.S. Senate. Republicans now control almost two-thirds of the governors’ chairs throughout the country. And over the last nine years, Democrats have lost almost 1,000 legislative seats in states all across this country. Today—today, in almost half of the states in America, Democratic Party has almost no political presence at all. Now, if that’s not a failure, if that’s not a failed model, I don’t know what a failed model is."
My question is – if the model of a LARGE social organization is a failed model, how much time would be needed to make a transition to a working model?
I am not a historian, or a sociologist, but I am absolutely convinced, that one or two years would not be enough – simply because of the huge social inertia. This bring us to the question of 2018 elections. It is absolutely clear to me – based on the evidence at hands – that 2018 elections will repeated the fate of the 2017 special elections. Fixing the Democratic party is a long-term goal. But preventing Republicans from keeping the majority in the Congress is a short-term goal. That is why I insist on separating two questions:
(a) What do we need to do to bring the Democrats in the Congress to majority?
and
(b) What do we need to do to bring the Republicans in the Congress to minority?
These are two different questions, and they have two very different answers!
The first goal requires long and painful reforms inside the Democratic party (simply because social inertia is huge; inside fighting is vigorous and makes all factions weaker; but none of the factions will give up the fight).
The second goal requires formation of a third national party – and it needs to be done NOW!
http://the3dforce.blogspot.com/2017/04/3dparty.html
Posted by Dr. Valentin Voroshilov at 2:20 PM