Ignoring sloppiness: a sign of tolerance or mismanagement? And how did it affect 2016 election. 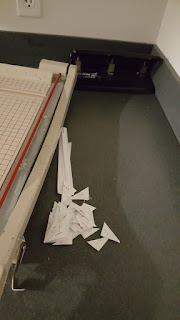 To one reader who may have been wondering – I have been out of the country, and I’d say, out of a social life, and spent some time with my close family.
I am back and I started teaching my summer classes. During my years of teaching I have developed a certain routine. Since I arrive very early, my first trip is to the office kitchen, where I charge the coffee machine to make my first mug, which would keep me for a couple of hours. This time, however, my routine had been broken. Since recent time, the office people keep the machine working only between 9 am and 5 pm. When the office is closed, the kitchen is still available, but the coffee machine is off. Turned out, one night a janitor saw a smoke coming out from under the kitchen door.  Evidently, some grad student, or a postdoc, left the machine on, with an almost empty jar sitting on the heater. Naturally, the facilities classified this incident as a fire hazard, and as the result – the first time in a decade – I was not able to use the office coffee machine in the morning.
That made me to bring my own personal small coffee maker. It also made me think. I realized that for the last several years our office kitchen has been encountering more and more issues. Lately, almost once a month we had circulated an email asking everyone to keep the kitchen clean.
This is the beginning of one of such long letter:
“Dear all, Unfortunately, I need to be reaching out to our community about kitchen etiquette.”
An excerpt from another one:
“Hi All, I wanted to address an issue that we have been having with the break room coffee machine. If the coffee machine is in the process of brewing, DO NOT remove the pot to pour a glass. No matter how quick you swap out the pots, some coffee is spilled onto the burner and damages the machine. A couple weeks ago the machine had to be replaced because the burners were no longer functioning, which was caused by coffee being spilled and left to burn on the hot plate”.
Several years ago, I would read similar emails maybe once a year. Nowadays, I see fairly regularly spilled coffee, stains from food, dripping socket, leftovers from cutting paper (see the above picture), empty boxes from fast food, etc. Or look at the pile of graded lab reports just left on a floor, despite the fact that 5 feet away there is a recycling bin. 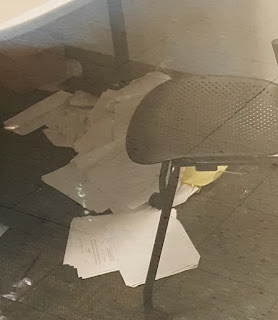 If newly hired employees misbehave, the main reason for that is - the management allows it, the management does not spend enough time for… and does not see the necessity in… teaching to the “youth” the structure of the professional behavior. The result is – a slow, graduate, almost invisible rise in the overall sloppiness.
If you start thinking about it, you will remember things which were not acceptable in the past, but have become normal these days. It happens everywhere, in stores, at hospitals. You cannot believe what is happening behind closed doors in nursing homes (and don't make me start talking about potholes!). And one more thing; for the last five years I have not attended a single big meeting that would start on time (for one more story about mismanagement, scroll down to Appendix II).
I am absolutely convinced that the rise in the sloppiness at all social and governmental levels was one of the factors which helped Donald Trump to win.
People do not like sloppiness.
Or, rather, people do not like when somebody else's sloppiness negatively affects their everyday functioning. But people do not want to confront those managers who tolerate the sloppiness (people in general try to avoid any “confrontation”, even if it is a discussion about how to make things to work better). Instead, they turn to a “strong leader”, who is (a) an outsider (i.e. does not belong to the current managers hated by people), and (b) promises to solve all the problems at once.
A week ago I would not let myself to publish this piece. I know that many readers would find it (for whatever reasons, some of which mentioned here http://gomars.xyz/op.html#stag) “offensive”, or “patronizing”. But in his latest “The New Rules” segment Bill Maher expressed a very similar sentiment (http://deadline.com/2017/05/bill-maher-hbo-real-time-superheroes-new-rules-1202098782/). He described Donald Trump as a Super Hero called upon by people to solve all the existing problems. 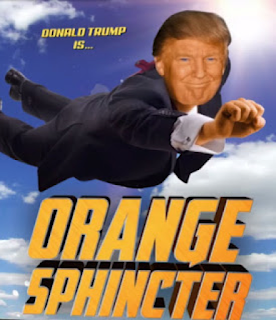 So, all I did in this piece is - I just added some personal perspective on the matter.

One might ask, why do I care so much?
Well.
Before I moved to the U.S. I held some managerial positions (http://www.GoMars.xyz/vv.htm).
In fact, my professional career looks like a zigzag; rise and fall, another rise and another fall, and another rise (plotting all my rises together one after another, the total line would have ended very high :) ). After getting my M.S. diploma I was moving up the ladder up to the assistant professor, but then the Perestroika destroyed the Russian economy and everyone was brought to a square one. Then eventually the new economy stabilized. I moved up again. For example, I ran an IT department at a state teachers’ school; I also used to work as a managing consultant for schools and school districts. I rose to the interim director of a small but important institution (a research arm of a city department of education). But then I moved to the US and started from working as a janitor at a supermarket. If I would not move, I could have landed at a position at the state department of education, and nowadays could have been working in Moscow (people with the knowledge of the matter told me that I was one of those who were on the list, and the list was short - if I knew all that, I still would have moved, but I would be building my career very much differently; people who were supped to be smart, honest, visionary turned out to be not as smart, honest, visionary as I thought; and of course, I was not visionary enough to see it then).
What I see now is that overtime more and more managers adopted "a reactive management style", and less and less managers use "a proactive management style"; instead of thinking ahead, anticipating what might happen and organizing - a.k.a. managing - people accordingly, they just wait until something happens and react; "don't fix it if it ain't broke" type of "management".
So, I know a thing or two about management. But when I moved to the U.S. I knew I would not be managing anymore. I have found a good and comfortable job, and just ignored all the sloppiness and all the signs of mismanagement around me.
I had one simple reason for ignoring those things – they did NOT have any effect on my life.
Until November 8, 2016.
For me, November 8th, 2016 was the result of (a) a "half" of a country was not thinking and voted for Trump (more on the role of "thinking" is here https://teachologyforall.blogspot.com/2017/04/cyber.html); (b) another "half" of a country was not smart enough to prevent Trump from winning (starting from pushing for the worst Democratic candidate: http://the3dforce.blogspot.com/2017/04/why.html).
Trump’s presidency had shown me that I should not have been ignoring the sloppiness around me. No one should have been ignoring the sloppiness around them. Maybe, just maybe, we would have had a different president. With the Trump at the helm all my hopes for a simple and quiet retirement are at risk. I am not old yet, but I want to know that when I will, I will be able to afford my medical bills – at the minimum. So, my current strategy is borrowed from The Department of The Homeland Security: “see something – say something”.

This is me saying what I see.
And I see a lot of sloppiness.

Appendix I:
a week later had read this:
https://www.linkedin.com/pulse/why-millennials-keep-dumping-you-open-letter-lisa-earle-mcleod
"It’s downright debilitating to a high achiever. I’m working my heart out and every time I look up Donna-Do-Nothing is contemplating how long is too long to take for lunch. I start wondering why leadership tolerates this."
Very resonating.
Appendix II:


Another interesting example of mismanagement comes from one of my summers.
One of the building with one of my offices got a brand-new air-conditioning system. The cost of the project was about twenty million dollars. The summer of that year was especially hot. When one day the temperature in my office reached almost 80 F, I called the maintenance and asked to cool the air down. They said they would. And soon the air got a little bit cooler. Not much, but OK. The next day the temperature went up again, I called again, the did something and for some time the air was not as hot as before, but then got hot again. This “dance” lasted for four days, then a guy came to me to see if it was really as hot as I said. It was. Long story short, one day he told me that he could not do anything about it. All I could get is a fan – but I already had two. Turned out, my office was the las in the long chain of offices and laboratories. If the day was hot and all rooms before mine were cooling air, the system had no power enough to cool the air in my office. I had to just live with it. Fortunately, that was not the only place where I could do my work. But this whole story got me thinking. Could you imagine that when the top managers were negotiating with the company doing the project, they would say: “OK, we give you $20,000,000.00 and you install the new air-conditioning system”; and they guy from the company would say: “Yes, OK, there is only one little thing. You know, when a summer will be very hot, one office in your building will not be cooled down, is it OK?” And the top managers would say: “Of course it’s OK, one office, not a big deal, take the money!”
I am sure this conversation is purely imaginary, and in reality, it was assumed that all offices in the building would be able to provide nice working conditions for all seasons and all seasonal temperatures. And I assume that the contract had a clause about warranty and conditions for repairs. But there was no mechanism put in place to initiate a case. It was a duty of the management to install such system which would collect information about various issues and complains; specifically, what to do if the same type of an issue reoccurs on a regular basis. And the management had to instruct the lower level on how to collect and process information and how to react on the occurrences of repetitive issues. But he management did not do that. So, all I had left with is an extra fan.
Did I mention that from time to time the air coming in my office picked up smells form other rooms, so sometimes I could sniff someone cooking, or smoking, or doing chemical experiments.
Again, fortunately, that was not the only place where I could do my work.
Posted by Dr. Valentin Voroshilov at 7:21 PM