“To Senator Warren In preparation to 2017 Mass Dem State Convention

“To Senator Warren In preparation to 2017 Mass Dem State Convention” 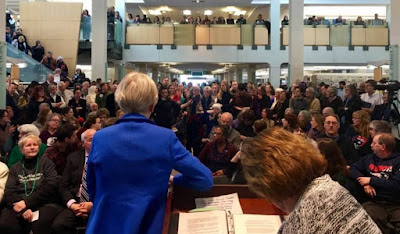 
Unfortunately, I cannot attend your town meeting on Monday due my work schedule, but if I could, this is what I would have said.


how come that so far, NO single top Democrat has addressed the TRUE reasons for America now has President Trump?


But losing to Trump’s team it is like a pro-football team loses to a bunch of guys who had never played football and just met each other before the game.


This requires DEEP analytical work. But NO ONE at the top of the Democratic party does it. Everyone keeps screaming the same slogans: “Trump is baaaad. We are gooood!”


It has not worked before – that is why Trump won – how can you expect it will work now, or in the future?


As a long-time physics/math teacher and just an educated person, I know that people who want to forget history, who do not accept mistakes, who do not analyze reasons for the mistakes – WILL repeat them again. Hence, in the current state of events, Democrats will lose – again, and again, and again – that includes the Congress in 2018, the next Presidential elections.


Thinking such is a clear path to more lost elections.


Acting like nothing happened makes Democrats look week, even “ball-less” – from the point of view of the swing “hidden” voters who elected Trump.


You have to demonstrate the will and ability to move on, like Ben Affleck demonstrated it by telling everyone he was in a rehab.


I watch the Democrats and what I want to scream is: “Trump is smaaaart!”, “Democrats are stuuuuuupid!”


Of course, when we say “Trump” we have to mean his all team.


or at least take a look at this 4-minut video: https://youtu.be/OwzKlFpIt_E)


Anyway, Senator Warren, I am sure you will be speaking at the 2017 Mass Dem State Convention. I will be there, too. And I really really want to hear how will you address the issue I describe in this post.


Or, you also will lose my trust in your abilities to lead.


But even more important, you will NOT gain the trust of the people without whom Democrats will never win again.


At this point it is not an issue of facts and logic.


At this point it is an issue of mass psychology and a character.”
P.S. click here for some of the publishing history on the matter
Posted by Dr. Valentin Voroshilov at 7:37 AM