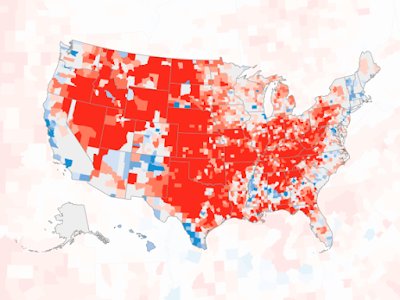 “A Sane America” vs. “An Insane America”; The Latter Has Won (so far).
No one would disagree nowadays with the statement that about 90 % of America is harshly divided between two large opposite “clans” (groups, strata).
The remaining 10 % flipped the election toward Trump, but soon may swing in the opposite direction (BTW: the Trump administration is doing everything in its power to prevent this from happening, Democrats should do everything they can to make it happen, but Democrats so far have no idea how to do it).
This phenomenon is not new. One can find a lot of press on the issue, for example, fine reading:
- The Atlantic (This election has divided Americans like few in history; https://www.theatlantic.com/magazine/archive/2016/11/making-up-is-hard-to-do/501146/);
- The Associated Press (Divided America; https://www.ap.org/explore/divided-america/);
- Politico (Trump’s divided state of America; http://www.politico.com/story/2017/01/donald-trump-divided-america-233652);
- 538 (Purple America Has All But Disappeared; https://fivethirtyeight.com/features/purple-america-has-all-but-disappeared/).
The division is being described as “economically succeeded vs. economically depressed”, or “Republican vs. Democrat”, or “liberal vs. conservative”, or “1 percent vs. the 99 percent”, or “rural vs. urban”, or “white men against the world”, or “intellectuals vs. non-educated”, and more (e.g. see AP).
Those descriptions are correct, but none of them is the one
every politician needs to address before anything else.
Those divisions do represent the fundamental basis for another one, which is the most important division America faces today – which is between
“a sane America” and “an insane America”.
BTW: “a sane person”, “an insane person” are clinical terms.
The reasons behind “SOCIAL INSANITY” have been presented in this paper:
http://the3dforce.blogspot.com/2017/02/sanders.html (and also the ways for dealing with it).