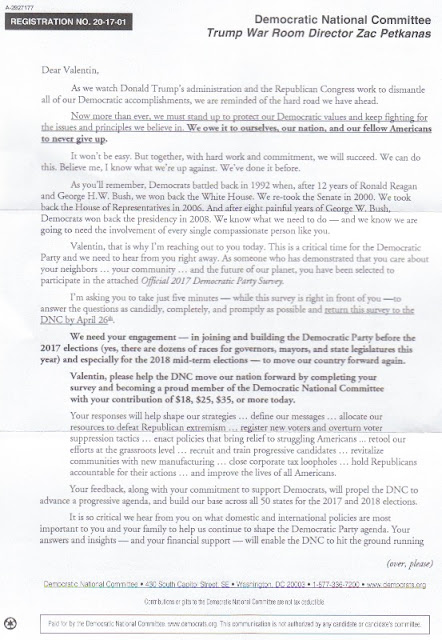 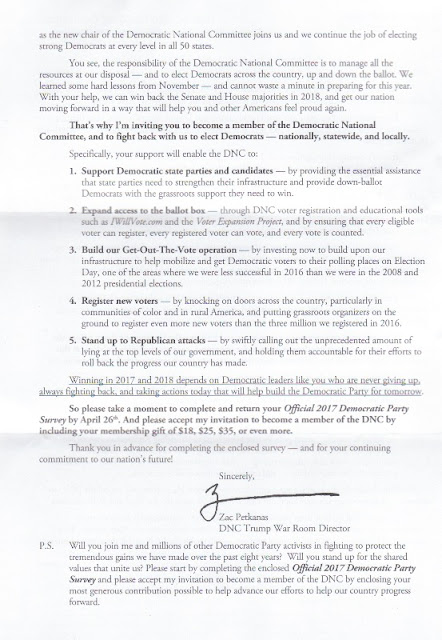 Hi Mr. Zac Petkanas (“DNC Trump War Room Director” – BTW, what a daft title, shouldn’t it be “Anti-Trump”, and a “Room Director”?),
You sent me a survey to learn what do I think Democrats should do.
My answer is to impeach President Trump.
Do you remember what a respectable Republican, former governor of Massachusetts Mitt Romney said about Donald Trump?
This link leads to some of his words: https://www.boston.com/news/politics/2016/12/01/here-are-all-the-harsh-things-mitt-romney-said-about-donald-trump
Including “a con man, a fake”.
Nothing changed since then.
President Trump represents the most embarrassing thing happened to America since the Watergate.
That is why the number one goal Democrats must focus on is an impeachment of Donald Trump.
It does not mean Democrats should stop paying attention to other things, like a health care, or Supreme Court, and others. But those things are natural, belong to a common-sense tactics.
If you are the “Trump War Room Director” – show us a specific plan leading to the impeachment.
And another thing, stop asking me for money.
I will not donate a single penny until some top official Democrat will step forward and take the responsibility for the results of the 2016 Elections.
I did my part, I was writing analytical letters, trying to warn the DNC of the upcoming mob revolution:
Start from this link http://the3dforce.blogspot.com/2017/03/brazile.html and then follow the reading.
But the blindness and the arrogance of the top Democratic officials has led to the loss.
Some people may have a short memory, and forget and forgive.
But those who do not remember history doomed to repeat the same mistakes.
You and people from the top clearly want to forget what happened as quick as possible.
Even worse, you want US to forget what happened as quick as possible.
All you want from us – donations.
NO!
First you do your part – prove that you know what you do and can use our money for the good.
Regards,
Dr. Valentin Voroshilov
P.S. click here for some of the publishing history on the matter
Posted by Dr. Valentin Voroshilov at 12:56 PM