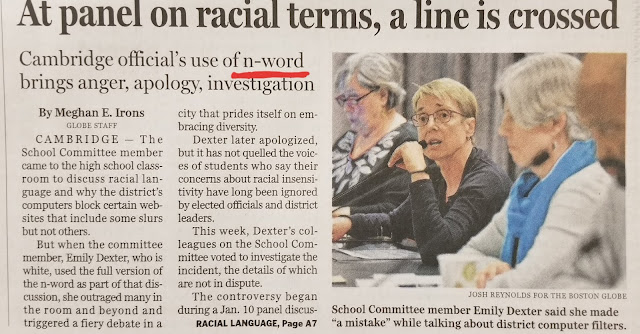 Some actions which excite a heated discussion, like painting a face, or dressing a certain way, have nothing to do with racism, but a lot with juvenile stupidity.
As I already mentioned, I would really like to know when and why this word has become the N-word in its current usage.
Some people believe that crack-cocaine was used specifically to suppress Black American population.
I doubt the N-word has been selected specifically to diverge the attention from important issues, but it sure seems to me that it works exactly like that.
Russians say “You can call me a kettle, but just don’t put me in an oven”.
Because people’s actions are much more telling than people’s words.
Or, people’s words are much less important that people’s actions (Trump!).
Focusing on who can and cannot use some words or outfits only seems important, but in realty those actions make no positive difference for anyone in the African American community.
And BTW: so far I have not read or heard anyone in the media who would be advocating the same view as expressed in this piece.
Dr. Valentin Voroshilov
Also, read “The Only Way To Defeat White Nationalism Is To Embrace “Black Nationalism”
P.S. I know, it is a risky post, but it is honest.
Appendix
Slavery is bad, awful, inhumane. However, the human race has a very long history of slavery. Many wars ended up by bring slaves to the country of victors. Vikings were using slaves in their villages. For centuries Russia had a cast of slaves. Slaves, and then serfs existed in Russia until 1861 - almost the same year when ... you know. Those slaves were not brought from other countries, they were Russians. But their owners could do, and did, to the slaves whatever they wanted to do, even bad, awful, inhumane things. Everyone who thinks that African Americans were the only people suffering from slavery is simply wrong.
Slavery was (and somewhere still is) the most inhumane form of exploiting humans by other humans. However, even slavery has been removed from many societies, there are still other - less visible - forms of exploitation. Any event when one person uses another person as a tool for his/her individual purpose is a form of
exploitation. From the general point of view, there are only two forms of human interaction: exploitation of one person by another person; or collaboration between different persons. It's either - or. So, when choosing what politician to support, ask yourself, does this guy want to exploit you, or he/she wants to collaborate with you? And judge by the actions, not by the words, because people who want to exploit others always lie. Always.
Posted by Dr. Valentin Voroshilov at 2:52 PM