Table of Content
Social Arithmetic is amazingly trivial!
The basic model has only one parameter and three variables.
1. Calculating an Individual Social Index:
ISI = smart*honest*active
with conditionings:
(a) if ANY of the multiples/factors is equal to ZERO the whole product is ZERO.
(b) if ANY (or two, or all three) of the multiples/factors is negative the whole product is negative.
2. Calculating the Compound Social Index:
CSI = the sum of all ISI for all individuals living in the Country

In 2016 in America CSI was slightly negative.


P.S. my shortest post so far; demonstrates the role of mathematics!
Posted by Dr. Valentin Voroshilov at 12:21 AM No comments:

Disclaimer: due to its extensive length (102 tweets) this article may be boring.
Foreword: Every society has times when people have to stand up for things they believe in. For America this time is NOW (again).
Hope: Do not judge a book by its cover, do not judge a piece by its title.

When one cell in a body “decides” that it is the most important one and starts converting all other cells into itself (“Agent Smith” in “The Matrix Revolutions”), the body eventually dies, and we call it “cancer”. Financial manipulations have become such a social cancer, which – if not cured or at least contained – will eventually lead to a social death of the Country.
For a physicist, a social change is just an example of a phase transition. It happens when one stable phase (e.g. ice) is replaced by another stable phase (e.g. water), but in between there is state with a chaotic and unpredictable behavior (e.g. a mixture of ice and water). In physics there are models which could help understand this type of a transition in any area, including social. In sociology that state with a chaotic and unpredictable behavior is called a revolution (which can be bloody, or soft).
A social revolution is always accompanied by the process of an elite replacement, i.e. when one dominant elite is gradually (or drastically) replaced by a new elite (some smart representatives of the outgoing elite can be accepted as partners into a new upcoming elite, if they are able to detach themselves from outdated views and principles).
The roots of American exceptionalism are very simple – for a long period of time America has been occupying an exceptional place among all other countries. However, an honest historical analysis demonstrates that American influence in the world has significantly grow after the WWII. In 1945 there was only one major country in the whole world which economy was not just spared from devastation, but had significantly grown. Europe, Russia, Japan were in ruins. Losses America had during WWII were much smaller than the losses of other countries. America had so much economic power, it was like racing a marathon when everyone had to start from the start line but one runner started one mile before the finish line. For decades, using its enormous economic power  America has been able to attract the best and brightest minds from all over the world. Clearly, the world is very different today than it was about 70 or even 30 years ago (the "runners" are not so far from each other anymore). But WMAE does not want to accept this change as a fact. Hence, all decisions WMAE makes are based on the models which do not describe the current state of the world. Hence, the results from those decisions will contradict the original goals those decisions had been made for. 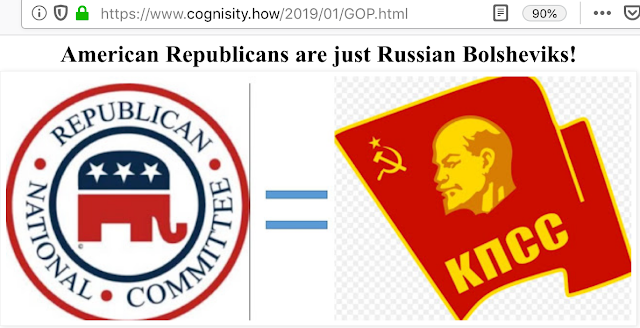 They do not believe in the rule of law, their motto is “ends justifies the means”. Politics for them is a game where the only goal is to win – no matter at what cost; no one judges the winner; there is only one rule – there are no rules (for them; unless they deal with the leader of the group/tribe!). Lying, deceiving, brainwashing, fact manipulating, destroying reputation, even using force is just the means which can and should be used if the situation calls for that (basically, the mafia mentality). And the Republicans are good at that. But all the Democrats do is they point a finger and scream “look, the Republicans lied again!”; and then the Republicans just shrug and keep lying even more. The behavior the Democrats demonstrate is so pathetic that sometimes I doubt if they are so stupid or idiotic, or maybe it is a purposefully designed strategy used to not upset rich donors.
7. The fight against the border wall clearly demonstrates inability of the Democrats to think.
For the Republicans the wall is a strong talking point, a good propaganda piece. Many Americans, especially in rural areas, do not like immigrants and against immigration (illegal and legal). For a long period of time their economic status has been declining and "those damn immigrants" turned out to be a good scapegoat. Of course, immigrants has nothing to do with the economic decline. Of course, the wall will not solve anything. If starting tomorrow no immigrant would enter the Country, that would not stop the inevitable - the demographic switch which will make the whites a minority. Building the wall to curb the demographic rise of minorities is like peeing on sparks falling down from a burning house - "at least I am doing something about it!". For the main goal of the Republicans the wall is useless. But that is exactly why the Democrats have to stop fighting it and need to embrace it, and to use the wall as a bargaining piece. How many billions will it cost? Fine. Go. But in return, we want ten times more in the budget for our programs (immigration reform, healthcare, free colleges, etc. - whatever they want). Even if the wall will be built, it will not affect anything for those rural Americans, hence, it can become a good talking point for the Democrats ("we told you that, remember?"). Plus, the Democrats can bargain that large portion of the jobs on the wall would go to low income Americans.
8. The Russia card is being played by the both parties, and both parties do it in the stupidest way possible.
Of course, Russia interfered in 2016! Russia has been interfering, is interfering, and will be interfering. And expecting from Russia something different was and is stupid! BTW: everyone who wants to know, knows that America is also not so innocent (the examples are numerous, e.g. check the "failing" NYT). Well, this time Russia outplayed American forces. Let’s see who will win the next round.
What the Democrats need to do is to get in the head of the #1 Russian – Vladimir Putin.
Vladimir Putin hates America. He hates America for breaking up the USSR. He believes that without American intrusion that would not happen. And he will do everything he can to get back at America (including the secession of Texas, if possible) – with a smile on his face. So, someone in the US counterintelligence should start thinking like Putin, trying to prevent the next “Russian-lead technological/political/social 9/11” (remember the “failure of imagination”?).
Russia is a strong and very resourceful country with a long and difficult history. Russia knew riots and revolutions; wars, starvation and prosperity. Russia won WWII (the allies entered the active war actions in Europe only when they realized that Russia could and would finish Hitler without any help). Russia rebuilt itself after WWII. Russia built an atomic bomb, a hydrogen bomb, sent a cosmonaut into the space. And Russian people know that they can do great and difficult things, hence they are confident they will survive any serious turmoil. Russian people are ready to sacrifice for the greatness of the Country. And also, due to a thousand of years of monarchy, Russian people do not believe in democracy, and in a case of a crisis always seek for a “Good Tsar” to rescue the Country.
And the new “Good Tsar” delivered on the promises, and established a stable and relatively good living for many Russians (if there is anything "positive" in a dictatorship it is stability, hence predictability – BTW, one of the reasons why big businesses do not mind dictatorships).
Putin knows that eventually he will have to step down. And when that happens he wants to leave Russia in the strongest state possible (that is what differs him from Trump, who only cares about his personal wealth and popularity, and Trump’s enablers, who only care about remaining in power). That is why Putin will never return Crimea to Ukraine. Putin has a very long term strategy (as a part of this strategy he replaced an old ideology with an orthodox religion, so freedom of thinking is not coming to Russia any soon). After Bolshevik's coup in 1917 no country would trade with Russia. But eventually money started to talk; businesses started to deal with Russia. Sooner or later this will happen again. At the worst, current politicians will eventually retire and new ones will not be taking Crimea so deeply to a hart.
American Democratic strategists should start learning from Putin, i.e. they should start doing what the title suggests – developing a long-term strategy (not strategery).
To everyone who considers himself/herself as a solder for progress I would say:
* Want to make a difference? Be different.
* Want to change the world? First, change yourself.

Conclusion:
There are many signs indicating the degradation of the WMAE in the last 30 years. Theoretically, there is a chance that the people who are currently in the power will be able to bend American democracy and prolong their reign for several more decades (“1984”). If that happens, the American leadership in the world would definitely go to the end (the American decline will inevitably lead to the loss of its great status). But the Republicans and their puppet master do not care about that. Their motto is "Après nous, le déluge". They prefer to rule in a declined America than being removed from power in a strong America. So, there is no doubt in mine mind that the process of the WMAE degradation will continue. The question is – will they drag the whole Country down with them?

Once in a while I tell my students my view on something outside of physics. I do not give an advice, I rather offer a question. This is what I said (more or less) after the 2016 election.
Watch out!
America is in a very unstable situation. America is at a fork. No one knows what will happen and how it will end (and not just in America, but in the whole world; the phase transition is happening all over the world, and no one knows where will it lead).
If you want to make sure that your future, and the future of your family will be bright, you have to be engaged, you have to pay attention to the events.
Do not trust anyone, question everyone, think for yourself.
If America would become “American Russia” or “Russian America” it would not affect my life at all. I have seen it; I know what it’s like. I could even move back to Russia. It would not make much difference anymore, but I could have a comfortable life using my American dollars, making some extra by teaching English or math and physics in English (as I tell my students, always have a backup plan, and a backup plan for the backup plan).
I would be fine.
But what would YOU do if that would happen?
Posted by Dr. Valentin Voroshilov at 7:29 PM No comments: