March for Our Lives: a Case for a New Political Movement

Republicans are basically American Bolsheviks. What they say does not matter, because their true ideology is not conservatism in any form, but being a winner. Win, win, win, using any means necessary! The victory justifies all your actions. ALL!
In large parts of the Country there are several generations of Americans who have been growing up within the culture where the number one rule is - winning no matter how. If you lose, you are a loser. And the first thing you lose is your freedom. So, if you don’t want to be a loser, don’t let anybody take any of your freedom.
Unfortunately, those people do not realize that by following blindly this rule they give up their own freedom. Hence, there is no hope those people would change their mind any soon.
Democrats have turned away from common people toward big money; it happened a long time ago, and nothing going to change any soon.
These are the reasons why I have been waiting for a rise of a small but powerful new political movement, the third force, so to speak.
Unfortunately, all current third-party groups are too self-involved, do not know what they are doing, do not know the actual role of a third party, and hence will not make any difference.
However, now I see a glimpse of a hope. 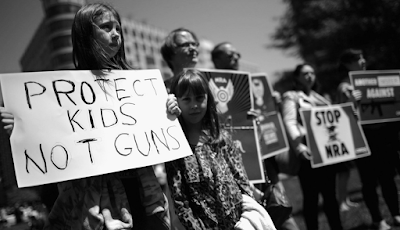 The wave of young people stepping up all across the Country against gun violence.
Hopefully, this is the beginning of a broad nationwide political movement.
It is political because the problem of gun violence cannot be solved any other way but politically. If young people decide to take their future in their own hands no one will be able to stop them.
Uniting around one political problem, they will have an opportunity to direct their force on other issues, like poverty, education, incarceration, and other.
Those young people who have been already politically active (young democrats, young republicans, etc.) have a chance to start making real difference by joining forces with their peers, because all young people have the same goal – to achieve success in the future world. So, if they have a chance to shape that world they should take that chance.
The only rule they have to follow is - question everything and everyone, no matter WHO tells you and what they tell you, ask them “how what you tell us will help us to have a better life ten years from now?”. 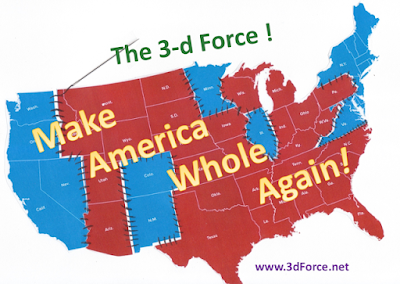 There is of course a chance that this movement will follow the fate of the Occupy Wall Street.
I am sure that everyone in the pro-gun lobby is praying  for that to happen, hence the strategy is simple, use any means necessary to deflect attention from a serious discussion and wait.

Addendum: Feb. 25th. The news is that John Kasich thinks the the two-party system is approaching its end. It is not the first time someone makes this prediction. But this is the first time when it comes not from a political analyst of sort, but from seasoned politician.
Kasich's situation is very simple. In the Republican party he has become irrelevant, and he cannot switch to the Democrats, so - the third party.  However, he most probably does not consider young people as a source for the new party. Which is mistake due to two reasons.
1. Most of the adults have very stiff/frozen minds.
They do not change their views.
If they hear something which contradicts their strong opinion they either just ignore it, or get frustrated. The frustration comes when they just cannot ignore the information, when they hear something which they should not approve, but which would contradict their belief of what is right. Many of the adults cannot express those feeling in words, it is hard for them to articulate the cons and pros in a logical manner. So, they turn to an authority figure: a preacher, a TV pundit, a radio personality, a celebrity, etc. Sooner or later they would hear something which would make sense for them. And at that very moment the frustration disappears and they are happy again.
What is important in this process, which has a name "from frustration to fixation" (or FF switch), that "making sense" does not mean that what hey heard is actually logically or factually correct. Not at all!
There is no logical of factual test for the statement they heard, the test is emotional - "I was feeling frustrated, and now I am not, that means that what I heard was true!"
This FF switch happens all the time, not just in politics, even in science.
Young people do not have yet their minds stiff and open to considering opinions which may not be aligned with their own.
Also, their minds are open to new ideas.
2. This is important because evidently old ideas do not work any more. I have been saying for along time that education needs a new parading.
But after November 8, 2016, it is absolutely clear to me that politics, economics, sociology also need new models, which are not invented yet. Those models which have been working for the last decades lost all predictability and have to be replaced.
That includes the two-party model of the political governing.
Of course, being young has its own downside, for example, the lack of experience. This deficiency can be minimised by enlisting adult experts. However, those adult experts fist should pass the test, i.e. they will have to demonstrate the ability to step aside when someone much younger them they will be dismantling their arguments.

Two more links to posts on the matter:

This blog currently has 54 posts (check the sidebar on the right): 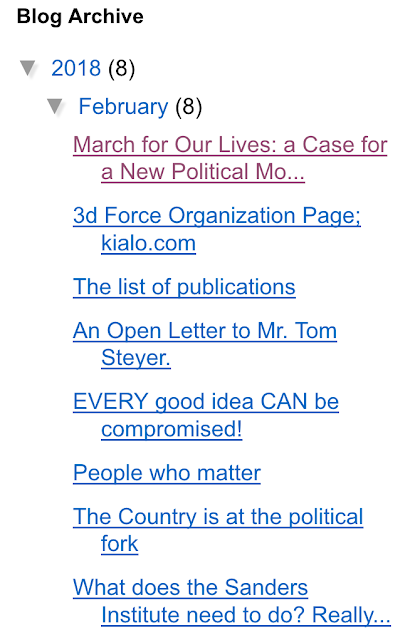 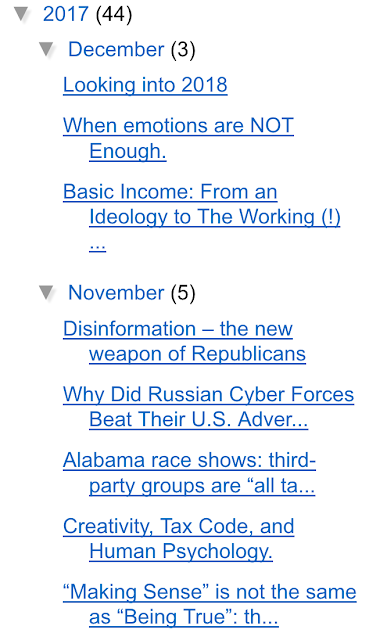 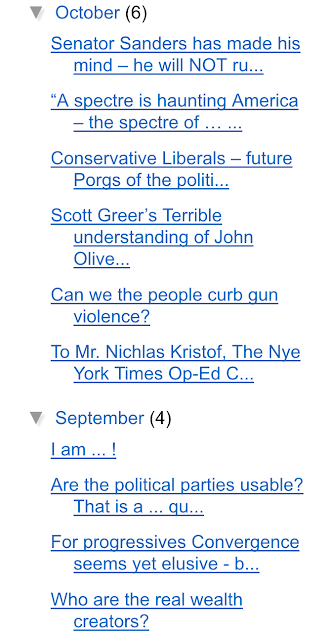 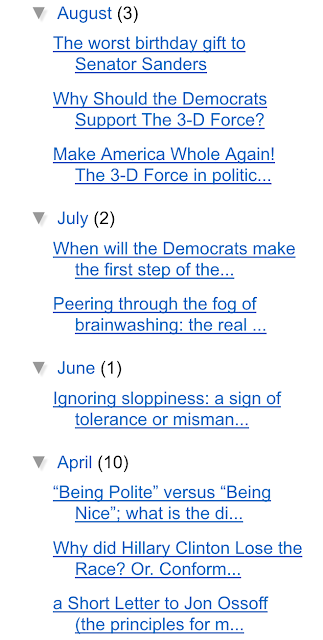 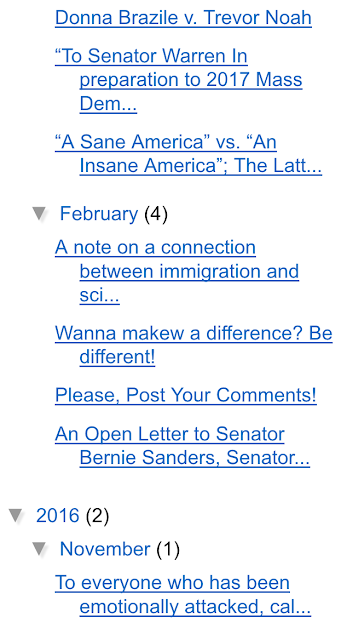