What to do with the tax code? What to do with the Federal budget? How to pay for the Medicare, Medicaid, Obamacare/Trumpcare, and many other government funded programs? How to close the budget deficit?
These questions are not new, but for at least two decades no major political party have been even trying to start a serious discussion about changing the tax code.
Until now!
It is interesting to think about why, in order to start tackling such a difficult problem like a tax reform, did the Country need to elect as the President of the United States of America such an odious figure as Donald Trump?
I have published several posts on the matter, so I will not be addressing this issue in this post (e.g. http://the3dforce.blogspot.com/2017/04/why.html).
But what also caught my attention is the fact the conversation about taxes is stuck in the fight between two ideological dogmas.
The dogmas, which have been developed about forty or fifty years ago, and do not reflect any more the current economic and social realty.
That automatically means that no matter which one of the two dogmas prevail, 99 % of American people will lose anyway (unless the third path will be found).
The first dogma states that cutting taxes boosts economy, it leads to a drop in unemployment and to a growth in wages. Based on this dogma, no tax can be ever raised; a tax raise in any form is forbidden.
This dogma was developed before the globalization, the Internet, the WWW, the AI boosted robotization, and before restructuring of the global powers. Hence, it is outdated (and there are numerous data proving that it does not work any more).
The second dogma states that only broad federal regulations can keep the balance between the needs of regular Americans and the needs of big corporations and wealthy individuals. Based on this dogma, government has to widen its regulatory actions, and grow its regulatory entities.
This dogma is also outdated due the same reasons, especially due to globalization.
The problem with dogmas is that they prevent people from searching for solutions outside of the mainstream views. Any idea which does not fit into the limits placed by a dogma is automatically rejected without being given any consideration.
It is worth to take a closer look at what a dogma is, and how a dogma evolves (a short detour into the philosophy of science and the theory of human activity: http://www.teachology.xyz/pd.htm).
First, a dogma is just a commonly accepted statement (or a set of statements) about certain principles which govern peoples’ actions.
Those statements have not been written in the sky, or unearthed from underground.
Those statements have been developed “by the people, and for the people”.
Dogmas have not always been dogmas.
At the beginning of their time, they were paradigms, beacons of the new ideas. Initially, only few people used them in their everyday life. In time, more and more people accepted those principles as the governing principles for their actions (because they worked!). Eventually, people have forgotten that those paradigms have been developed under specific circumstance for answering specific questions about life, to solve specific problems of those times. Eventually, the paradigms have become statements which had to be accepted without any questioning – i.e. dogmas. Time passes, life changes, but dogmas remain still, and soon some people start noticing a divide between the needs of the life and the dogmas, which only grows with time. When that happens, the society starts to experience the need for new paradigms.
When that happens, people who are willing to think beyond the dogmas begin offering new ideas, new approaches to solutions to problems at hand. Many of those ideas may be silly, or crazy, but they create a fertile soil for a new paradigm, and one of those ideas becomes a seed from which that new paradigm eventually grows up.
Now one can predict which new idea will eventually outlive all other ideas and become commonly accepted as the new guiding principle.
That is why it is so important to not just shovel away anything which does not fit in the limits set by the current dogmas, but give a fare consideration to many of them. Of course, without some filtering, scientists, researcher, politicians, political strategists may be drowned under the shower of views, ideas, propositions. Currently, the filtering is based on the “halo effect” (https://en.wikipedia.org/wiki/Halo_effect), which is basically asking “who says that?” instead if “does it make sense?”.
The better process of selecting new ideas for a further deeper consideration should be based on the answers to the questions like:
– what do we want to achieve?
– what is our ultimate goal?
– what is wrong with what we have now, and what do we want to fix, what change do we want to see in the end?
– how will we know that our goal has been achieved?
I like to summarize this strategy in a concept map (I like using mapping for teaching physics: http://teachology.xyz/mocc.htm, but mapping is a universal way of representing connections). 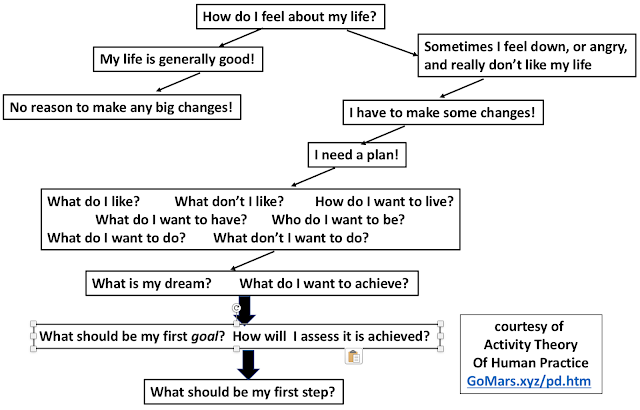 Posted by Dr. Valentin Voroshilov at 11:46 AM