A note on a connection between immigration and science

There is a heated discussion about how changes in immigration policy can affect science and engineering in the U.S.

1. Trying to STOP the influx of illegal immigrants by putting in place more and more restrictions of any kind is the same as trying to stop alcohol drinking by installing The Prohibition Law.
NEVER gonna work – due to the same reasons – human nature.
It’s like a drug trafficking will only end when those people who use drugs will stop using it, or all drugs will be legalized - but instead of drug consumers we should talk about business owners who hire those illegals (BTW: do you happen to know why?)
2. Thinking that putting in place more and more restrictions of any kind will STOP the influx of illegal immigrants is just naïve; it is a form of self–lying. In reality it will only lead to more sophisticated forms of corruption (again – have you heard of The Prohibition?).
3. The true problem with scientists, and engineers, and doctors is not related to immigration AT ALL – thinking that is also a form of self–lying; or deflecting an attention from an actual problem – which is: the U.S. just does not produce any more enough scientists, and engineers, and doctors.
For example, quote: “Nearly a half of PhD aerospace engineers, over 65% of PhD computer scientists, and nearly 80% of PhD industrial and manufacturing engineers were born abroad.”
(check http://www.gomars.xyz/BD.html).
We all know that America is a country of immigrants.
And America must stay an open to people who want to live and work in the Country.
We just need to remember that any large disbalance (like a trade deficit, or an intellectual deficit) is a potential danger to the country - might lead to such big changes like electing Donald Trump.
Think!
Posted by Dr. Valentin Voroshilov at 7:00 PM No comments:

Wanna makew a difference? Be different!

Do you want to make a difference?
If you do, the first step is to be different!
:)
But what does it mean - to be different?
Would be painting your hair in pink enough?
That depends.
To be seen as a different person - that would have been sufficient.
To make a mark in somebody's life - probably not.
Wanna make a difference?
Be different with your yesterday's self!
Help others be different!
Start teaching!
Learn something new!
Help to make a change!
Watch! Listen! Read! Think! Conclude! Write! Act!
A tale say that a Greek philosopher Diogenes (https://en.wikipedia.org/wiki/Diogenes) used to walk "carrying a lamp in the daytime, claiming to be looking for an honest man."
"He believed that virtue was better revealed in action than in theory."
First, this is a tale. Second, the word" honest" might have had many different meanings. If we try to rephrase Diogenes today, we would say something like: "Smart, direct, tough, fair." 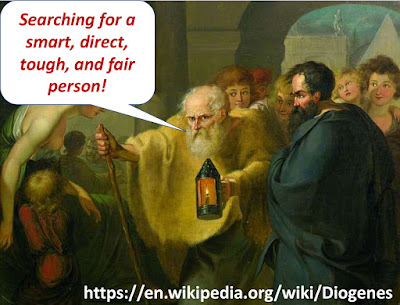 Everyone who considers himself or herself to be such a person should seek other smart, direct, tough, and fair people to join forces in resisting any negative social tendencies.
And there are many.
For example, David Brooks wrote recently in The New-York Times (https://www.nytimes.com/2017/02/21/opinion/this-century-is-broken.html?_r=0): "Fifty-seven percent of white males who have dropped out (of searching for a job V.V.) get by on some form of government disability check. About half of the men who have dropped out take pain medication on a daily basis. A survey in Ohio found that over one three-month period, 11 percent of Ohioans were prescribed opiates. One in eight American men now has a felony conviction on his record."
No wander there are so many people who feel depressed and helpless.
Trump and his team brilliantly uses it against ALL the people (https://teachologyforall.blogspot.com/2017/02/4s.html).
If we want to make a difference, we need to unite.
And we need to be smart!
https://youtu.be/OwzKlFpIt_E
Posted by Dr. Valentin Voroshilov at 12:52 PM No comments:

Out of all my posts on this blog, these four are the most connected to the long term political future of the Country.
An Open Letter to Senator Bernie Sanders, Senator Elizabeth Warren, Senator Chuck Schumer, and Senator Al Franken
The Dawn of The Era of Dictatorships; Explained by The Systems Theory.
The Only Way To Defeat White Nationalism Is To Embrace “Black Nationalism”
The Degradation of The White Male American Elite
Peering through the fog of brainwashing: the real reasons behind the conservative politics.

Appendix:
Below is an actual comment left at
http://www.bu.edu/today/2017/us-russian-relations-under-microscope/

**
“Keeping the West weak is to their advantage.” Trump is not to blame for the economic or military obligations this country faces today. All of these were created and put into place by previous administrations, career politicians and Washington insiders who profit from the actions of the military industrial complex and its perpetual largely ineffective “nation building” schemes that began at the end of the second world war and continue to this day under the supervision of both political parties.
Trump is not and should be expected to perpetuate those expensive failed policies. He should concentrate and building up the strength of our military, while at the same time avoiding engaging us in any avoidable new conflicts. In short, he should walk softly and carry a big stick.
Many people do not like Trump because he looks like a wolf. FYI, a sheepdog looks like a wolf to a sheep. But ironically it is the genetic similarly between the wolf and sheepdog and the teeth of the sheepdog in particular that allow him to fight off the wolf when necessary.
Trump is a sheepdog whose bark and bite may ultimately prove very uncomfortable for Putin should he take any offensive actions against the USA and so I strongly suspect that Putin has more respect for Trump than that the paranoid sheep recognize.
Time will tell, but I strongly suspect that Trump will do a wonderful job of keeping his flock safe.

**
This comment perfectly represents the sentiments of a common Trump supporter. No logic. Outburst of emotions. Arguing with this type of a person would be the same as arguing with a patient of an Alzheimer clinic.
The main theme is shown in the end – “I want to feel safe” (meaning, this person has not been feeling safe for a long time). “Trump makes me feel safe”. The rest is just self-justification.
Many liberal pundits have not noticed this stressful emotional state of many Trump supporters, they just bluntly called those people "basket of deplorables". We all know the result.
P.S. click here for some of the publishing history on the matter

Posted by Dr. Valentin Voroshilov at 7:19 PM No comments: